Ever since the Diaspora, when they were scattered all over the world, Jews have always longed to return to the holy city of Jerusalem. This city is also named Zion, after one of the seven hills on which it is built.
In the nineteenth century, the longing for Zion became politicized. Throughout Europe, nationalism was on the rise. Like the French, the Germans, and the Dutch, the Jews saw themselves as a nation with their own language and customs. All they were lacking was their own country. As a minority surrounded by other cultures, they were always under threat from anti-Semitism, which sometimes lurked beneath the surface but could also become open and violent. Many people saw the foundation of a Jewish state as the only way to escape this vulnerable position. This aspiration became known as Zionism.
Theodor Herzl is seen as the founder of political Zionism. In 1897, he organized the first Zionist Congress in Basel. This body functioned as a kind of Jewish parliament, with annual meetings of delegates from all over the world. In the early years of the Congress, the Netherlands was represented by the banker Jacobus Kann.

Zionism in the Netherlands

In the early twentieth century, the Jewish community in the Netherlands was well rooted in Dutch society. There was no pressing reason to emigrate, and Zionism attracted few supporters. Even so, in 1899 Nehemia de Lieme, an insurance broker in The Hague, established the Dutch Zionist League (NZB). The Dutch Zionist Student Organization (NZSO) was founded soon after, followed a few years later by the Jewish Youth Federation (JJF) and the Jewish Women’s Association for Practical Work on Palestine (JVPP). In this period there were also a few rabbis, such as Simon Philip de Vries and Chief Rabbi Aäron Barend Davids, who openly supported the Zionist ideal, breaking with traditional tendencies among Dutch Jews. The religious Zionist movement Mizrachi founded a national society in the Netherlands, in which these two rabbis played a leading role.

Towards the end of the First World War, the establishment of a Jewish state became a more likely possibility. The defeated powers included the Ottoman Empire, which was forced to give up large portions of its territory. The province of Palestine, with Jerusalem as its capital, became a ‘mandate’ under British control. In 1917 Lord Balfour declared the British government’s support for the establishment of a ‘national home for the Jewish people’ in Palestine.
To make the desert landscape suitable for habitation, idealistic young European Jews prepared to cultivate the land as pioneers. Training centres were established throughout Europe where they could learn handicrafts and agricultural skills before their aliyah, or voyage to Israel. This training was called hakhsharah, and the young people in question were known as Palestine pioneers or halutzim. Along with practical skills, they learned the newly developed language of modern Hebrew, which later became the language of the Jewish state. Immigration to Mandate Palestine was strictly regulated by the British, who issued only a few thousand immigration visas a year. These visas could be obtained upon completion of a hakhsharah programme.

There were several hakhsharah training centres in the Netherlands, the first of which was the so called Deventer Association established by Ru Cohen in 1918. The young people in training were spread throughout the country, living and working with farmers. Theoretical education and cultural activities took place at the association's headquarters, Beth Halutz (Pioneer House) in Deventer. There were about 250 members in 1940.
In 1933 the religious Zionist movement Mizrachi founded the hakhsharah division Dat-va-Eretz (Religion and Country). Appropriately enough, the organization’s two centres in Beverwijk and Franeker became known as kibbutzim.
Also in 1933, the orthodox religious movement Agudat Israel set up a hakhsharah department. This movement was not at all Zionist in outlook, but it took the opportunity to establish a presence near the Jewish holy places in Palestine. In the village of Twekkelo, near Enschede, they moved into a large house that became known as Haimer’s Esch.
In the 1930s, many German and Polish refugees came to the Netherlands. Young Jewish refugees between the ages of eighteen and twenty-four (who had mostly fled without their parents) were housed in an agricultural training centre known as Werkdorp Wieringermeer, established in 1934. The centre had more than three hundred occupants.
Several hakhsharah centres were founded for young people under the age of eighteen. They were known collectively as Youth Aliyah. Paviljoen Loosdrechtse Rade housed the largest number of pupils, about fifty in total. These young people received training from farmers in the region. In Gouda, the farm known as Catharinahoeve became a centre for young pioneers in 1939. There was also a training programme at Hof van Moerkerken, a country estate in Mijnsheerenland.

Consequences of the occupation

The occupation of the Netherlands soon began to affect the Dutch hakhsharah movement. The centres in Mijnsheerenland and Beverwijk were closed by order of the Germans, perhaps because of an ordinance prohibiting Jews from living near the Dutch coast. The kibbutz in Beverwijk moved to the village of Laag-Keppel in Gelderland.
The various hakhsharah departments made a joint decision to establish the Joodse Centrale voor Beroepsopleiding (JCB), which was responsible for running all their activities, as well as offering courses and other forms of education.
From May 1940 onwards, emigration to Palestine was prohibited. Young people who completed their training and received an immigration visa could not leave the country. The JCB provided them with a new place to live in Elden, near Arnhem, where they could stay until the situation improved.
Because the hakhsharah divisions contributed to the country's food supply, they were under the impression that they were eligible to be exempted from Arbeidseinsatz (forced labour) and deportation. Against their expectations, Werkdorp Wieringermeer was closed in March 1941. Sixty pupils were allowed to remain there and bring in the harvest. The others who lived there were taken to Amsterdam and placed with host families. On 11 June 1941 a major razzia (raid) took place in Amsterdam as a reprisal for activities by the resistance. The pioneers were the first to be seized from their homes. Some of them had anticipated that this would happen and managed to flee to safety in time.
The occupants of the centre at Paviljoen Loosdrechtse Rade were well aware of what lay in store for them. One of the leaders, Joachim Simon, also known as Shushu, had been held in Buchenwald for some time before he came to Loosdrecht. He knew what was going on at the German concentration camps. He and the Westerweels, a married couple, set up the Westerweel group, which concentrated primarily on protecting the pioneers. This group provided addresses where they could go into hiding throughout the Netherlands and devised escape routes so that small groups could escape to Switzerland or Spain. After the razzia in Amsterdam, members of Werkdorp Wieringermeer joined the resistance group, as did members of the Deventer Association.
A relatively large number of pioneers survived the war, including more than half of the Deventer Association. The two divisions of Dat-va-Eretz were harder hit: only a third of the members were alive at the end of the war. The occupants of Huize Voorburg in Elden all had immigration visas for Palestine. In early October 1942, they were deported by way of Westerbork to the Aufenthaltslager (detention camp) of Bergen-Belsen. This was a camp for Jews who could potentially be exchanged for German prisoners of war held by the Allies. As a result, a few of these pioneers did reach Palestine during the war. 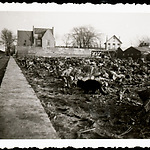