Many Jewish diamond workers referred to their occupation as ‘the trade’. Jews were traditionally plentiful in the Amsterdam diamond industry. The lack of a guild in this trade enabled Jewish newcomers here to specialize in diamond work from the seventeenth century onward. Thanks to their international trade connections in areas where diamonds were mined, the Sephardi Jews became the most prominent diamond traders in Amsterdam. Over time, Jews gained control of the diamond finishing industry as well.

At first diamonds were polished at home, often in attics. Polishers operated the polishing mills with their feet. As production increased, the polishing mills were driven by horses and later powered by steam (after 1850).
In 1870-1873 the diamond industry flourished during what became known as the Cape Era, because of the huge quantity of diamonds found in South Africa around this time. Many non-Jews entered the industry as well during this period and became particularly adept at polishing.

The diamond finishing industry comprised various occupations, which each required separate skills. Rough diamonds were cleaved first, then cut into shape, and finally polished. Cleavers and sawyers were at the top of the diamond workers’ hierarchy, followed by the cutters. The cutters consisted of brilliant cutters and rose cutters. Brilliant cutting was slightly more complex than rose cutting. Master polishers came next, followed by apprentice polishers.
Diamond polishing involved positioning the stones horizontally on a rotating disc attached to a polishing mill. They were soldered onto a so-called cap (a kind of copper retainer). The diamond had to be rotated inside the cap. This was done by turners. Disc sanders sanded these discs. Although disc sanders were not actually part of the diamond industry, they were obviously affected by the ups and downs there.
Earnings within the diamond industry varied considerably depending on the trade and the quality of the stones finished. While the diamond industry remained heavily Jewish (in 1906 nearly 30 percent of all working Jewish men in Amsterdam and nearly 10 percent of all working Jewish women were employed there), many polishers were not Jewish. During the late 1880s more and more of them polished diamond shavings (known as chips) into small brilliants. In addition to ornamental diamonds, diamonds for industrial purposes were produced in Amsterdam.
Although wages were high in the diamond industry, the industry was deeply affected by economic cycles because diamonds are luxury items. Each recession instantly carried over to the diamond industry.

In 1894 following a massive strike, the Algemene Nederlandse Diamantbewerkersbond [general Dutch diamond workers’ union] (ANDB) was established to improve working conditions in the diamond industry. The founders included Henri Polak and Jan van Zutphen. The union was highly successful and was in many cases the first trade union in the Netherlands to introduce several measures improving the position of the diamond workers, such as minimum wages, insurance for sickness, disability, unemployment, and death, as well as the eight-hour working day and a week of paid holiday. Many Jewish diamond workers joined the Sociaal Democratische Arbeiderspartij [social democratic workers’ party] (SDAP) and other left-wing parties via the ANDB.
In addition to efforts to achieve material improvement for the diamond workers, the Union, and especially Chairman Henri Polak, did his best to promote the cultural enrichment of diamond workers and introduce them to art and culture. The ANDB had its own library, offered a wide variety of courses, and organized outings. Polak also had the famous architect H.P. Berlage to design the ANDB union building. The elegant premises, immediately nicknamed ‘de Burcht’ [the bastion] for their impressive appearance, are located on what is now the Henri Polaklaan and are the premises of the Vakbondmuseum [trades union museum].

Economic slump in the 1920s

Both the ornamental diamonds used as securities and industrial diamonds were very important for the Nazi war effort. For this reason, notwithstanding the large number of Jewish diamond merchants and finishers, the diamond firms were not assigned to a Verwalter at first. Instead, the Reichskommissariat supervised the industry directly.
Problems arose when the deportations began in July 1942, and this largely Jewish occupational group was in danger of disappearing. Accordingly, a list was compiled of about 500 diamond finishers and 300 entrepreneurs, who received provisional exemptions of deportation. The first list was drafted with input from the Bedrijfsgroep Edelmetaal en Diamant [industrial group for precious metals and diamonds], which was formed after the ANDB was dissolved in 1941. A total of 545 Jewish diamond workers completed applications for themselves, their partner, and children under 16 who lived with them (1,230 persons altogether). Three passport photographs were required for each person listed on the application. These forms and many of the passport photographs remain in the ANDB archive at the IISH. The forms and photographs of persons included in the Monument have been scanned and added to the Monument.
The 500 diamond workers and 300 dealers selected received a stamp entitling them to exemptions from deportation for the moment. They were left alone until mid-January, when the Nazis halved the lists of exempt diamond workers and picked up the ones whose exemptions had been revoked in February. Suspicious that the diamond merchants had held back their stocks (i.e. had not surrendered them to Lippmann-Rosenthal), the Nazis let them purchase exemptions for relatives (not members of their immediate family) at fifty carats of industrial diamonds each. As soon as this demand had been met, these exemptions were revoked, and the two hundred or so individuals concerned were deported immediately.
Most of the remaining diamond merchants and finishers were deported to Westerbork or Vught in September 1943. Plans were made to set up a diamond industry in Vught and Bergen-Belsen. Although these plans never materialized, the diamond workers transported to Bergen-Belsen from Westerbork had various privileges for a while. Ultimately, the diamond workers and merchants from Vught arrived there as well in 1944, together with the last small group that remained in Amsterdam. Nearly all the deported men perished. Some of the women survived.

On the diamond workers, see:

On the history of the ANDB, see in addition to the work by Bloemgarten:

On Jewish diamond workers under the Nazi occupation of the Netherlands, see: 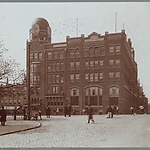