Kaddish is recited at various occasions, especially as the prayer for the dead.

The prayer for the dead is known in Hebrew as 'kaddish yatom' (of the orphan). Rather than referring directly to death, the text blesses the name of the Holy One and prays for the establishment of the Kingdom of God in the near future. The prayer is recited by a son or another close surviving relative to conclude the funeral ceremonies and subsequently during the year of mourning and at the Yahrzeit. For the reciting of the kaddish tradtionally a minimum of ten Jewish men (a minjan) must be present.


An audio recording of the prayer can be found at the website Yizkor. 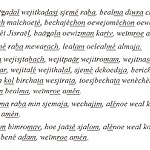