The 1st Montessori, De Wielewaal – which was established in 1926 – is an Amsterdam school on Corellistraat: at that time a street in the newly-built Amsterdam-South neighbourhood. A preparatory school was housed on the ground floor and a primary school on the top two floors.

In its early days, quite a lot of Jewish children attended this school. New, spacious homes in the vicinity of Beethovenstraat attracted many up and coming Jewish families from the working-class Jewish Quarter around Nieuwmarkt. An Amsterdam teacher at the time coined the phrase ‘In 1930 the Jews crossed the Amstel River’. After Hitler and the Nazis rose to power in the 1930s, more and more German (Jewish) families fled to places like the Netherlands. Many settled in this Amsterdam neighbourhood. When the Second World War in the Netherlands broke out (10 May 1940) about 20 percent of De Wielewaal’s pupils were Jewish.

As the new school year 1940-41 progressed, restrictive measures against Amsterdam’s Jewish population were increasingly implemented. Yet, Jewish children were still allowed to attend school. At the end of that term, on 10 July 1941, a registration of Jewish children took place by order of the German Government’s Commissioner for Amsterdam. A number of head masters informed parents that this task ‘has to be carried out today in light of pending transfers’. Some teachers already bid goodbye to their Jewish pupils.

In August 1941, the German occupier issued an order determining that all Jewish children in the Netherlands would be removed from their schools and transferred to special Jewish schools. This was confirmed in the 29 August Staatscourant: a newspaper of new laws and official government announcements.

Given that practically all of the Netherlands’ Jews were deported in 1942 and 1943, by the end of Sept 1943 these Jewish schools ceased to exist. Many children were arrested with their parents during razzias (roundups) and transported from the Hollandsche Schouwburg located on Amsterdam’s Plantage Middenlaan – well-known Dutch Theatre where Jews were forcibly assembled – by train to the Westerbork transit camp in the east of the Netherlands. Families who went into hiding and were betrayed were sent to this transit camp as well. They were housed in a separate punishment barrack. Many schoolchildren ended up with their parents in the death camps Auschwitz or Sobibor in occupied Poland. They were usually killed with gas the day they arrived. A number of children were put to work in the camps as force labourers. It is difficult to find the words to explain the atrocities that took place in these camps. Almost everyone was brutally murdered or died of malnutrition and exhaustion. The few individuals who did survive had to go on living with what amounted to unimaginable traumas.

After the liberation (May 1945), only a few Jewish children returned to school. The children who survived the war were for the most part too old to go back to primary school. Jewish children who returned from the camps or from hiding places also ended up living in other parts of Amsterdam: via the intervention of the city authorities because other people now lived in their homes.

In 2006 a memorial was unveiled at De Wielewaal displaying the names of 165 pupils who lost their lives as a result of wartime violence. Seven more names were added in 2016 thanks to additional research. Of the 172 (former) pupils who did not survive the war, two-thirds were young people who were already former pupils by the time the war started. A few former pupils were adults when they died, some of them were already married, but the majority were children. The youngest pupil was 6 years old and the eldest was 24.

Years of research by a former pupil, Jaap Post, and teacher and author Ronald Sanders into De Wielewaal’s wartime history led to the 2007 publication of the book In verband met de vermindering van het aantal kinderen… (Concerning the declining number of pupils. . .).

The Dutch-American Holocaust educator Hannie J. Voyles translated and revised the Dutch edition, which was released in English in 2011 as Storming the Tulips.

The above text, which is largely based on this (Dutch) publication, has been borrowed with the author’s permission. 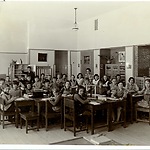 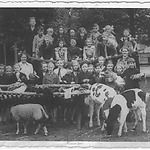 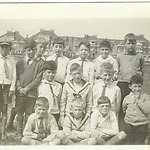 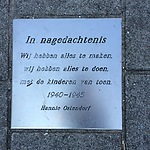 Related based on these keywords: