A prayer asking that the souls of the victims of anti-Semitism may rest in peace. After the Second World War, a special version of the prayer was written for the six million victims of the Shoah.

Throughout the centuries, Jews have suffered persecution. The El male rahamim was written for martyrs in the Middle Ages. The post-Second World War version includes the names of several concentration and extermination camps where many Jews were murdered. For the reciting of this prayer traditionally a minimum of ten Jewish men (a minjan) must be present.


You can listen to an excerpt from the prayer on this website: Yizkor. 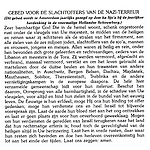