The home of Kurt Ikenberg

Kurt grew up in barrack 15, where his parents Klara Ikenberg-Löwenhardt and Ludwig Ikenberg lived in a small apartment.

The so-called old camp inmates (alte Kamp-insassen) of Westerbork did not live in crowded dormitories but had been allotted small apartments in the wooden barracks. This is where Kurt spent the first and only three years of his life.

Each apartment was entered through the kitchen with, to the right or left of the outer door, the lavatory. The kitchen gave entrance to two small rooms: living and bedroom, taken together 6.50 x 3.25 metres, or 21 square metres. Once in the Summer of 1942 the deportations had started and the camp became overcrowded, these apartments had to be shared by two families. 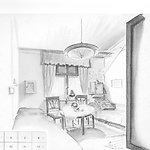