Fate of a jewish handicapped boy 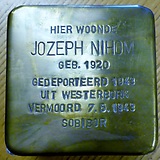 Jozeph was the only of his family who did not survive the Holocaust. Because of a handicap he lived in Amsterdam and was caught. The rest of his family was hidden in the province and survived camp Westerbork. In the 50's they immigrated to the USA.

Jozeph (born 24 nov 1920) was the eldest of three in the family of father Salomon Nihom and mother Helena van Gelder. He had a younger brother Jaap/Jack and sister Rosetta/Ron. Jozeph had a handicap and could not walk unassisted. He grew up in Nijkerk where many members of the Nihom family lived. At a certain age he moved to Amsterdam to be cared for in the "Joodsche Invalide". With caregivers or …
Lees meer