Memories of a hidden friend of my father’s

About six years ago we tried but failed to find the Friend of my Father’s on the Digital Monument of the Jewish Community. At that time there was also no information about a ventriloquist or a dummy named Mickey Mouse. Nevertheless, we continued to search and found a picture postcard from around 1935 showing two photos of the ventriloquist ‘Uncle Max’ (Max Santiel) and Mickey Mouse on the Internet site of the Jewish Historical Museum. The moment we found those photos was nonetheless a strange but pleasant experience for us. The following are some WWII experiences that I have tried to record. Mickey Mouse For a while we also had a Jewish man living with us in hiding. To be caught meant certain death. You could not talk about it to anyone, not even to your best friends or neighbours. His name was Max and I think his surname was “Satiel”, but I am not certain about that. I am certain, though, that he was a ventriloquist. Before the war he used to perform with his dummy “Mickey Mouse”. Jewish artists were no longer allowed to perform at that time. At great risk to himself, my father tried to present his programme in different towns and Mickey Mouse would also perform then in the role of presenter. In so far as I can remember, M.M. would appear in the centre of the stage between and in front of the curtains from where he told his story and made the announcements. No one saw Max the ventriloquist himself. I think he used to stand behind the closed curtain. It was forbidden, but then…! They should have presented themselves. For a ventriloquist he had an unbelievable capacity to make Mickey speak without betraying the slightest lip movement. He must have been one of the best, if not ‘the best’. Sometimes, in a family circle, he would take his Mickey Mouse out of its case and he would take part in the conversation. There were also occasions when our Father would bring August along and then the sparks would fly, (literally and almost figuratively). The things they said to each other made us forget about everything and we would laugh and laugh till the tears rolled down our cheeks. Even my Father, Max and the dummies were at times unable to utter another word. It was ‘On-the-Spot-Life-Theatre. It was “Art” with a capital ‘A’.

Uncle Max For us he was just uncle Max and he had a yen for salty liquorice. I do not know how he got hold of it but I do know that sometimes he would be missing one and then he would ask us who had taken it. Us children would keep quiet then, whereupon he would propose that if the person who had taken the liquorice were to openly admit it, he would give them another one. Great! Both Loek and I had taken some. Max lived apart from his wife. In so far as I know, they had two children who lived somewhere in Amsterdam. One day he heard that his wife and children had been deported to Germany. That evening he brought Mickey Mouse back into the living room. A terrible discussion must have taken place. He and Mickey Mouse thanked everyone and said “The curtain is coming down for the last time now.” My parents tried everything possible to make him stay, but he answered that there was “No other way out for him. Now that my wife and children have been deported, I will also be leaving”. He asked my mother to sew a Star of David on his coat, and he seemed very proud of it. The following day he handed himself in, perhaps at a police station, and we never heard from him again. I must just mention here as well that our neighbours also had one or more Jews living with them who did survive the war. In all that time we had our suspicions, but we could never be sure. 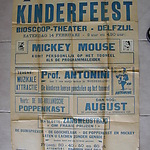